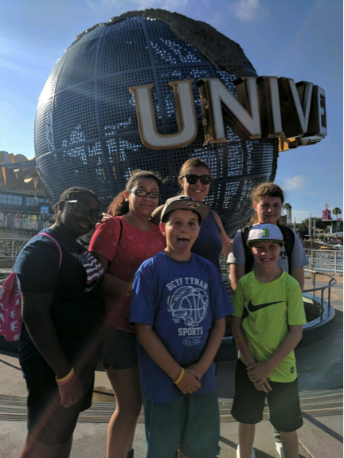 South Boston, September 2017: South Boston Neighborhood House had the amazing opportunity last month of sending 5 kids on a trip to Disney World through Don Rodman’s Disney for Kids. Disney for Kids is a branch of Rodman for Kids, with a mission to “…broaden the horizons and experiences of deserving at-risk children and teens in the Dorchester area by sending them on an all expenses paid trip to Walt Disney World in Orlando, Florida, each August.” The trip was a weeklong and included 200 kids total from the Dorchester area.

The Ollie kids selected for the trip range in age from 9 to 14 and had never been to Disney or had a traveling opportunity like this before. It was SBNH’s second year being a part of the Disney for Kids trip and we could not be more grateful. As mentioned in the Disney for Kids mission, the trip is all expenses paid by Don Rodman, founder of Rodman for Kids. The Ollie also raised some extra spending money for the kids because you just can’t go to Disney without bringing a little magic back. The group also visited Universal Studios during their stay in Orlando.

“It truly was a magical experience for the kids,” says Cheryl itri, Director of the School Age Program. “These are kids who don’t ask for anything and never expect anything to be handed to them. Some of them had never left South Boston, so this experience was really priceless.”

South Boston Neighborhood House would again like to sincerely thank Don Rodman and all the wonderful people at Rodman For Kids. We are truly honored to be included in this program and we continue to be moved by Mr. Rodman’s endless philanthropy. Thank you for believing in the importance of serving the kids and families in our communities and valuing what we value here at the Ollie. The kids had a wonderful trip and we loved hearing all about it.